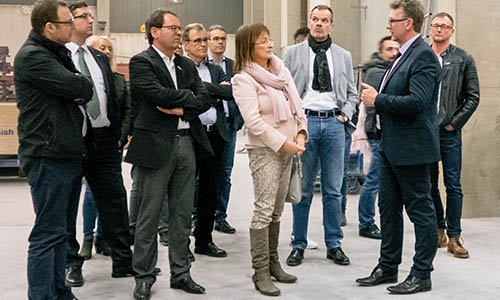 The German embassy in Kabul must be extremely bombardement save and resistant.

Anyone who thinks that building is built stone on stone is deceptive. It consists of numerous modules. These were designed and manufactured by ADK Modulbau in Neresheim. On two production lines, building modules and the complete shell for buildings are being built around the world. The members of the marketing club Ostwürttemberg looked more closely at ADK.

At the transport to Kabul it happened. When the truck bounced over a steep pass, one of the building modules for the German Embassy slipped off the loading area. "The shock was great. Fortunately, though

Shell construction is at work

The planning of the buildings is individual and possible according to customer requirements and guidelines. Two production lines are available for the module production at the plant in Neresheim. The entire shell is also made here. Before the modules come to the construction site, 90% of all the work is already done on or in them. This includes the installation of the ventilation, the sanitary facilities and the façade including insulation. Furniture and equipment required, something for hospitals, are also considered. "In the factory, we are independent of the weather and can also work in the winter. This is an enormous advantage over the construction site ", says Rainer Jordan.

The finished modules are transported by truck to the next port, depending on the destination. From there the ship continues. As far as Russia, China and Ethiopia, the modular buildings are being built and are being assembled on site.

More than half of the sales are made with hospitals and medical centers. ADK has, among other things, established the City Hospital in Nottingham. The largest project to date is the Novosibirsk Neurology Hospital. This consists of 360 modules. Buildings are also being created for numerous other industries. The largest module with 6 x 6 x 23 meters was created for the Sparkassen-Business-Club at the Voith-Arena in Heidenheim.